5. Where are the two speaking?

6. What does the father mean?

7. Why does the woman suggest Betty should look at the computer?

8. What's the relationship between the two speakers?

12. What time did the train leave?

13. What are they talking about?

A. An American girlfriend.

A. She's tired of joking.

B. She's afraid of English.

A. He had another joke for her.

B. What he said was not real.

C. He wanted to make friends with her.

16. Where do you think the two speakers are?

19. Who do you think the two speakers are?

B. An actor and an actress.

C. A club worker and a student.

20. When will the man have to go to the performan

A. He is too busy to join any club.

B. He wants to have more time to study.

C. He has great ability of performance.

22. What will the man probably do if he agrees to join the section?

A. He will spend time holding activities.

B. He will fill in a form for his decision.

23. Where was Romana Banuelos born?

24. What did Romana Banuelos do in Los Angeles?

A. She became a maths teacher.

B. She put money into a business.

C. She helped her family move to Mexico.

A. She started a bank only for Mexican Americans.

B. She set up a food company in the US.

C. She was asked to work for the government.

30.-Linda is not coming for the party tonight.

V. what about you?

33. Even though we're in difficult times, we need to keep hope.

34.--Dad, I'll be in the final singing competition tomorrow.

--Be careful not to get a sore throat and your voice.

36.--I wonder if you've made a decision on the project, Eric.

--Not yet. I can't make it until I have first-hand on prices.

37. 1 didn't mean to trouble Curry yesterday. It was pouring with rain so Ihis offer of a lift.

38. My elder brother my wet sports shoes and made me sit by the fire.

39.-The frozen yogurt tastes like ice cream but has of the fat.

C. whether will she danceD. when is she leaving

On 28 of March Richard Byrd stood outside the small house. He shook hands with the men

who were leaving. They were heading back to the main camp on the coast of Antarctica (南极洲).

He was looking forward to the challenge of spending the winter at the base camp. He would be

recording the weather. There was plenty of food and fuel (燃料) in the tiny house. He felt sure

But something did go wrong. Byrd was burning the fuel for _44 . But the fumes (有毒气体)

were not leaving the house. Slowly he was being poisoned (中毒). On May 31 he broke down.

When he came to, he made himself into his sleeping bag. Three days later he 45 it was a

o stay alive. He was so 49 that he could hardly

walk. But he forced himself to do the basics. He 50   food and made myself eat. He took

51 of weather and sent radio messages. But by late June, the men  52 that something was wrong. Most of the time, Byrd's messages made no sense.

On August 11 Demas and two others reached the base camp. They  53  recognized (认出)

Byrd. He was very thin and looked terrible. Byrd _54  them and then fell to the ground. The

men had arrived in time. After two months of care, Byrd's good  55  returned. He and his men 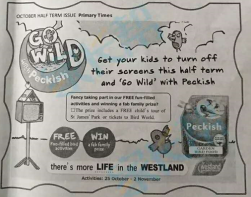 56. We may get the advertisement above  ·

59. The advertisement offers information mainly to ______.

A. the kids have to feed the birds in the Westland

B. the activities last from October 25 to November 2

C. the kids are not allowed to tum on their screens in October

D. a free child's tour of St James'Park is not included in the prize

One morning while Officer Vogel was on his coffee break in a restaurant, a man ran in a yelled. “Officer! A little kid is driving a car down the street!"

He ran out at once and saw a car

an hour--but it was going very straight. He jumped into his police car and followed it. When the car was stopped, Officer Vogel looked inside. The driver was a little boy. His name was Rocco Morabiro and was 5. In the back seat was his two-year-old sister. Both children wen crying.

“No!" Officer Vogel said. “You stay with me!" Then he drove them to the police station and he called their mother. They had many questions for Rocco. The first question was: "Where did you get the car keys?"

It was 7 a. m.---rush hour---so there was much traffic. Rocco drove one mile in heavy  traffic. Then Officer Vogel stopped him.

Newspapers and TV stations heard about Rocco, and a lot of reporters went to h

reporter asked Rocco, “What do you want lo be when you grow up?"

61. Rocco's car was not going straight because of _.

62. The little sister's going with Rocco showed that _.

A. she was afraid the would have no one to play with

B. she didn't want to wake her mother up

C. she wanted to look for her father

D. she wanted to drive the car too

63. The officer asked Rocco to stay with him in order that .

A. other cars would go much fast

B. he would drive them home

C. Rocco would not cause any accident

64. Rocco and his sister were taken to the police station to _.

A. have a good breakfast

B. Iearn some traffic rules

D. wail for their mother and deal with the matter

65. According to the reporters. Rocco's driving was __.

The Silk Road is the name of different roads that long ago connected Europe, Africa and Asia. People reached these different places along these roads. Scientists believe people began to travel

the Silk Road about 3000 years ago. By the time the Chinese silk trade became important in the

world. The Silk Road covered almost 6500 kilometers. It went from Rome to China, which is from

the West to the Far East.

Merchants travelled along the Silk Road to carry silk, of course. They also carried and traded

Along and around these ancient path(小路), have come many fascinating and mysterious stories.

It is said that Roman soldiers who lost a war travelled through central Asia. They decided to

live somewhere near the ancient Chinese villages. Some of these Romans married local Chinese

women and the legend of the blond-haired, blue-eyed tribes of China was started.

Israel. They were prisoners (俘虏) of war almost 2800 years ago. People say that these people

travelled along the Silk Road. They kept their Jewish way of life for a long time.

During its busiest period, the Silk Road allowed people from many different cultures and

countries to meet each other and mix. The Silk Road allowed the sharing of valuable things and

new ideas. It included people and trading goods from different areas. All these peoples travelled

the Silk Road. And they shared goods, stories, languages, and cultures.

In modern times, the old Silk Road routes (路线) are still used, but now they are crossed by

trains instead of camels and horses. There is even silk route museum in Jiuquan in China. It

has over 35, 000 objects from all along the Silk Road. In this way, China protects the history of

many countries and peoples.

A. the Silk Road was divided into Europe, Africa and Asia

B. Roman soldiers would like to travel along the Silk Road

C. people could travel to different countries along the Silk Road

D. people shared only silk on the Silk Road

67. The underlined word “Merchants” in the passage probably means.

A. the Silk Road began with the wars

B. the Silk Road covered almost 6500 kilometers in China

C. people began to travel the Silk Road about 3000 years ago

D. people from Israel were not included among people on the Silk Road

69. The old Silk Road routes are still used because .

A. there are many old stories about them

B. the historians and scientists think highly of them

C. China will make good use of the Silk Road again

D. people can keep on traveling and trading along them

71. The teacher can see in our eyes that we areknowledge. She tells us that knowledge will give us wings to fly.

72. Jessica Wong sells her bags in a small shop, but she has alsoan online business to sell them.

73. Our teachers and parents will be    of us because we have grown up and can be responsible for ourselves.

74. Although you may not like to do chores. You should your parents around the house.

75. We willthe junior high graduation ceremony tomorrow. It is a very special time for us. [来源:学科网ZXXK]

Soap is widely used in our lives around the world. Once soap was a dangerous-to-make hair

P76  . But it is something that it would be difficult to live without today.

Soap is everywhere. We use it every day and c 77  it as something important in our lives.

made and used. Ancient Egyptians also made soap. At one time, soap-making was not s  80

That’s because lye(碱液)b  81 chemical burns or even made people blind in the making process. Other dangerous materials were also m  82 with animal fats and oils. Later. soap became

a   83  in stores and people gradually stopped making it in their homes.

for making hair stay in place or smell good. The Arabs first made the soap that we know today.

They created colored, liquid, and hard soaps. They even had soaps which were used for

Soap became people's f  8S   in the late 1800s. Advertising in Europe and the US helped

people understand the connection between cleanliness and good health. Now. Soap is something we wouldn't want to live without.

I'm glad 10 hear you'll come to Wuhan. Wuhan is a beautiful city full of culture and history, Visiting City Museum is a good way to learn about Wuhan. we can go boating in the East Lake. Enjoying the fascinating views. Then. we'll invite you to our class and talk about school tife. My friends and I will have a party for you at home. And you can taste our traditional food as well If possible. You may watch Han Show. Hope you'll hav